A dilemma that is repeatedly raised: A “pure” vegan should not have pets, as this is another form of domination. Also pets such as cats cannot survive on a meat-free diet. I have cats (all rescued) as furry companions and in reality they dominate me. However, they do eat meat. Lee, what are your thoughts on this?

…To date the only articles that I have read argue that vegans should not keep cats or other meat eating animals. Dogs, I think, can do fine on a plant based diet? It would be great to hear what others think. “Speak” soon.

An important question, thoughtfully posed. It’s comforting to think these animals domesticated themselves many thousands of years ago by hanging around the warmth of our campfires; and we do enjoy cuddling up together on a frosty night. But yes, domination is the rub. Wildcats and wolves never asked to become Persians and pit bulls. We came up with those ideas.

The process of neoteny—selectively retaining juvenile traits in the adults—makes cats and dogs dependent. It’s a vulnerability that taps into that nurturing response we feel for a lost child. No wonder people go into a pet shop with the rescuer’s urge. It’s very hard to turn away from the face of the doggie in the window.

I’d never say cats and dogs lack volition, sensitivity, various forms of strength, or individual character. But I think we need to acknowledge that their biology has been changed in a way that creates reliance on human care. Imagine bulldogs trying to fend for themselves, and it’s clear. In fact, because of their shape, most bulldogs can’t give birth without surgical assistance.

The vegan principle calls on us to end the exploitation of other animals, and to defend their interests in living on their terms and not ours. If we apply this to wildcats and wolves, we cannot agree with the breeding of these animals into a vulnerable state.

Our deeply personal connections with cats and dogs are real, but they present no justification for this systematic manipulation. The most thoughtful love for an individual cat or dog would, on the contrary, bring us to ask if humans aren’t unfair to feline and canine communities when we assume they are ours to have and hold.

We do not steer anyone to “responsible” or “humane” animal breeders. It’s neither responsible nor humane to encourage animal dealers. The retail pet shops and the breeders down the road all profit from the notion that other animals are our things; and they fling more dogs, cats, fishes, birds, gerbils, ferrets, rabbits and other domesticated animals into the stream of commerce, while abandoned animals multiply and the ones in pounds are routinely killed—predictable elements of a commercial cycle of supply and demand.

A feral kitten looks out from beneath an apartment block.

So we’ll suggest that people who wish to live with animals go to the local shelter or cat rescue group, for many animals could do with a permanent home. Should vegans adopt as well? Sure. These animals are the refugees from a system that uses them. It’s right for their advocates to help them if we can.

I live with several cats who were in dire straits when I met them. I care for them with my whole being. But they don’t really exert power over me: they can’t make me care, or ask for what they want.

I let them in. I hold the keys. Many cats much like them, including from their own family, will never be saved from those streets where cats are chased into traffic as sport, and sometimes caught by people training fighting dogs.

According to the American Kennel Club, “the Siberian Husky is known for its amazing endurance and willingness to work.”

Many vegans—showing discomfort with what Emy noted as the domination, involving the animals’ reliance on an agreeable human for acceptance and lifetime care—prefer to call the animals in their homes companions. But companion means partner, one with whom one shares bread. The bond of companionship is by mutual agreement, not by selective breeding for the purpose. So, like man’s best friend, the term companion is a euphemism.

It’s frank, not disrespectful, to say cats and dogs are animals bred as pets. Those we know, we call by name.

My friend at Green Menu asked:

Hi, Lee! A friend posted on my wall about cats being carnivores…your opinion? I want to raise my cats properly and make sure they eat right.

For a vegan, caring for a carnivore is no easy feat. With dogs, the case seems easier. Many vegans buy vegetarian dog food (although they still have

to face the connection between veterinary pharmaceuticals and industries that vegans would rather avoid).  Some vegans save money and spare the excess packaging by taking the DIY route to dog nutrition.

But how do we feed our cats? Special vegan formulae have been created and called cat food, but are they safe? A study published by Christina M. Gray, DVM, et al. (2004) in the Journal of American Veterinary Medical Association was inconclusive; and the researchers stated in a follow-up piece in 2005:

While a manufacturer’s statement that thousands of healthy and long-living animals are on their diets is interesting, additional information is needed to support the diets’ nutritional adequacy. Thousands of cats may be fed these diets, but we are not aware of any data that have emerged from a comprehensive health assessment of any of them.

Humans are primates; we can apply the vegan principle to our diet. When asked if the meals we eat are safe and nourishing for humans, including our children, we might confidently quote the Position of the American Dietetic Association and Dietitians of Canada on Vegetarian Diets: “Well-planned vegan and other types of vegetarian diets are appropriate for all stages of the life-cycle including during pregnancy, lactation, infancy, childhood, and adolescence.”

Now, what do we cite when it comes to the animals in our homes? Shouldn’t we be able to state we’re ensuring appropriate nourishment—even though the dogs and cats can’t ask us to present proof for them?

The most up-to-date, comprehensive study of the daily nutrient requirements for dogs and cats currently available is the 424-page Nutrient Requirements of Dogs and Cats (2006). Here are two excerpts, from page 313:

If we’re going to take animals in, we have to offer them appropriate care. At the same 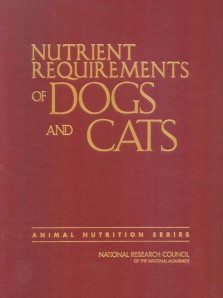 time, we need, I firmly believe, to be forthright about why the entire custom of having pet animals needs to be challenged—for it has pressed us to stay dependent on the very animal agribusinesses we ourselves have renounced.

And for the animals’ own sake. Though we might go to great lengths for the animals we know and love, we also know that many can’t or won’t. In the United States, some 5 to 8 million dogs and cats are relinquished to U.S. shelters each year. Each is as likely to die as to be saved. Some shelters try to stave off tragedies, setting up animal food banks, for example, to help cash-strapped people who’d like to keep their animals. Yet the number of pets who die each year in U.S. shelters equals the number of people in Los Angeles. Something is deeply wrong with our everyday relationship with other animals, and we need to go deep into ourselves to transcend it. Social justice is elusive in human relations; but we strive for it, and we need to also strive to be fair members of the community of life on Earth.

We currently use resources faster than our planet can replenish them. We’re running out of grain and the space to grow it as our population is now outpacing food production. It turns out we use more grain to feed our domesticated animals than to feed the human population. And not only on farms. One dog can consume around a quarter-ton of food each year.

And we take up a lot of land, water, and landfill space because we’re breeding animals whom we then must provide for. Our cats and dogs, horses too, compete with coyotes for the right-of-way in green spaces. Dog waste pollutes water and kills aquatic life.

Not only do cats chase frogs, chipmunks and birds when roaming outside; their presence also imperils wildcats. Yes, conservationists say the greatest threat to the world’s vanishing wildcats is interbreeding with domesticated cats.

What we can do

Before the 1800s, pet-keeping was mainly an aristocrat’s hobby. It only took off as a popular custom in the Victorian period. Since then, pet sales and pet care have become an industry supported by tens of billions in annual spending. But the industry is a relatively new invention, and not too deeply ingrained in our culture to challenge.

Lately, municipal bans on pet sales are being proposed. Granted, these provisions bar only certain (usually high-volume) outlets. Still, they can lay the groundwork for ending breeding and sales. Various dog breeds are now banned in Europe. It’s breed-specific legislation, yes. And I think it’s the right thing to support.

What else can we do?

Companions. A pleasant word for pets, but it sugar-coats manipulation. Their ancestors were wolves.

Some will say a culture without pets would be joyless. I’ve also been told—told, indeed, by other vegans—that it’s unrealistic to question a practice so enjoyed as pet-keeping. But we can care about other animals, and derive joy from their presence, without controlling them.

What’s more exhilarating than a view of a wolf or a wildcat running over their own land? There’s breathtaking joy in respecting animals untamed.

Featured image: source. Wildcat: source. Please consult a veterinarian about the health of the animals in your care. Neither this blog nor any other website can substitute for medical advice for an individual animal.