Best wishes for the week ahead, everybody.
Love and liberation,
Lee.

June is Pride Month — dedicated to, and celebrated by, LGBTIQ+ and allies worldwide.

I believe animal advocacy, at its best, works to challenge and transcend domination wherever it is found, and I think that belief explains why so many vegans from the movement’s earliest days have conscientiously objected to war.

It’s why so many of us sense that heterosexist oppression stems from the same place as human supremacy.

This month 51 years ago, at Stonewall Inn, an interracial group including nonbinary and transgender people rose up against vindictive policing. They rose up against bigotry, hate, and hurt. Their pain and their courage combined to open up new pathways to self-actualization for the rest of us. Pathways to respect. To love. To many more acts of protest, and to unforgettable times of joy and celebration.

And yet the torture and death of George Floyd reminds us, again, that — as far as we have come — the struggle for human freedom is still grotesquely immature. It tells us respect still takes a back seat. And it is a setback for every living being on the face of this Earth.

Pride month 2020 is a time of sorrow because of yet another murder in a pattern of authority-wielding murders, another profound loss to the collective conscious soul. Why? Why can’t we just be decent?

The Art of Animal Liberation must be committed to human dignity and respect for nonhuman life as a dual striving. The loss of George Floyd makes the reason all the more intense, and the need to speak up for the #BlackLivesMatter movement all the more urgent.

My CounterPunch bio identifies me as working for animal liberation. It feels right to have that bio follow a piece about the selective way “looting” is discussed in connection with #BlackLivesMatter protests. It feels right to spread the word that we’re all on this planet together, and no one is free as long as bullets, cages, and chokeholds rule our culture. Authoritarianism has got to go. Humanity must change now. There is no more “I won’t see the change in my lifetime, but…” because now we’re bracing for the storms of a distorted climate. It was always time for respect to ascend, and the very existence of a future, for us, should not be taken for granted.

Absolutely, stop the wet markets. But unless you happen to be vegan, don’t forget to take the log out of your own eye.

Read the full article at CounterPunch.

People eat bats and snakes and dogs and things like that. These viruses are transmitted from the animal to the people, and that’s why China has been the source of a lot of these viruses.

But outside of making a case for veganism, who gets to call anyone out for animal use?

Kindly read my latest article for CounterPunch and share it further if you’re so inclined.

My friend Lois Baum recently gave an invited sermon at the Unitarian Universalist Church in Rochester, NY. In the sermon, Lois quoted a statement attributed to an animal liberation summit, circa 2010:

Veganism is a moral and ethical way of living; the practice of non-cooperation and non-participation in anything that exploits nonhuman animals, humans, or the environment. It is a moral baseline for our conduct and how we are revealed to the world.

A spot-on description, I think, of the connected ethic of a vegan life.

Making Others Do Disgraceful Work

And it leads me to think again about the humans who do the disgraceful work of killing living animals and turning their bodies into commodities for human consumption.

I do not believe vegans should invest in undercover investigations of these employees’ actions. Some people disagree. Here is my logic.

One of the points made by early vegans is that we shouldn’t expect other human beings to do disgraceful work for us, work which we’d avoid doing ourselves.

That, I think, invokes an empathy and fairness principle. It does not assume that we should blame these employees for doing what they do…badly.

Animal agribusiness is all unfair, and so many humans are implicated. Only a few people are vulnerable enough to be cast out of society for the way they do it.

In the words of the Chronicle of Philanthropy, wider concerns involve a “frat-like ‘bro’ culture” that manipulates and stifles advocacy careers.

Some say the #MeToo problem in advocacy can be fixed with more female leadership. Can it?  Read on.

Animal advocacy produces many images in which selectively bred animals appear as cute, contented, and wanting to delight you or be friends with you. And generally we don’t regard it as needing further thought. It’s the imagery of endearment. Post adorable piglets, and maybe it’ll make people who keeping doing those bacon posts on Facebook see bacon in another way?
On Sunday 6 August at the Western New York VegFest in Buffalo, I’ll present Cuteness, Memes, and Animal-Liberation Imagery: A Slideshow and Discussion.
We’ll look at how endearing imagery can work against animals and their defenders in a way the movement
has yet to explore.
This presentation asks: Does popular animal-advocacy imagery reinforce animals’ vulnerability? Is so, why should this matter to us?
Is there something we can learn here from the effects of race-based caricatures? What do we know about the power of imagery from the abolitionist struggle? To say all oppressions come from a common impulse, as I wrote in On Their Own Terms, isn’t to say that various groups are the same, or that the kind of inequality they’ve faced is the same. And facile analogies don’t help. Claire Heuchan has observed how “Black experience is regularly placed on a par with animals as a provocation.”
This is why it’s so important that the slideshow’s concept does not set out to compare caricatures reflecting white supremacy with caricatures that justify domestication. Distinct struggles against systems of domination should be known on their terms, even as they teach about the common source — the human urge to dominate and control — and ask ourselves how we’re challenging or continuing it.
Thanks to my patrons who make it possible for me to give up days of shift work to contribute this effort to the WNY VegFest. If you’d like to help this outreach continue, consider supporting it with a regular contribution (which can be as modest as $1 per month) on Patreon.

What’s Up? Enjoy cake and a cup of fair-trade coffee or a hearty vegan meal at Wildflower on the first Saturday in November, when I’ll facilitate a slideshow and conversation on Cuteness and Memes in Animal Advocacy.

We’ve all seen “Why love one but eat the other” images. Indeed, why do we love a puppy yet have no regrets when it comes to eating the calf? Then again…

Does setting the ideal in “loving” animals compromise nonhuman dignity? What can other social movements teach us about these idealized images?

Eric Nyman, owner of Wildflower Vegan Café, said, “Our business is nurturing bodies and minds. We’re excited to open November, which has traditionally been World Vegan Month, by offering space for Lee’s work on memes—inviting advocates and the public to consider how feel-good imagery might endorse exploitation.”

Event sponsored by Wildflower Vegan Café, and patrons of the art of animal liberation.

This graduation season, Michelle Obama gave a commencement speech for the City University of New York. The country’s largest urban public university, CUNY is historically dedicated to bolstering opportunities for people of modest backgrounds. Michelle Obama’s speech, at CUNY’s flagship City College in the Harlem District of Manhattan, lauded this year’s graduates for their own struggles. But the bright-pink elephant in the room—City College reportedly makes higher-than-average use of both part-time and adjunct teaching staff—never got a mention.

. . .At this time, knowledge is critical to a public understanding of civilization-threatening problems. A 2014 Pew Research survey showed that most people who’ve attained a college degree know that global warming is driven by human activity, while most people without that education do not.

And if this is so, higher education matters urgently to sound politics.

But opportunities to contribute to society, its knowledge, and its policies are being denied to current and future teachers and researchers.

Meanwhile, people positioned to change this are speechifying at commencements.

Read this piece in full in today’s edition of CounterPunch.

Yes, I’m in. Let’s put an end to non-military availability of military-style weapons.

And what of the military use of military-style weapons?

And the use of weapons for terrorizing the other animals in our midst?

How about we put an end to heterosexism, domestic violence, rape culture, hatred against queers or anything perceived as queer? Could we stop requiring everyone to mark “female” or “male” boxes, in light of the way this binary has so long negated the relationships of, and otherwise obstructed, so many people in so many times and places, even resulting in medically prescribed physical harm? Female and male are not absolute categories, and the binary fails a humanity striving to be all we’re meant to be.

How about we make solid efforts to show respect for Latinx, for the LGBTQIA movement, for Muslim communities, for non-citizens?

Consider that we needn’t identify ourselves in terms of nationality, and thus needn’t be involved in a constant reconstitution of enemies which this social construct generates. That we could transcend bordered societies.

And how about we cut out bullying, and teaching bullying at home? How about we rid our everyday, continuing history of the classism that systematically denies creative self-expression to the majority of people?

How about we refuse to accept captivity and habituation of other animal communities as a human prerogative?

How about we respect everyone’s interest in living their way, unmolested, expressing themselves creatively as they were meant to do, and support them in doing it?

How about we stop investing in win-lose scenarios and essentially meaningless competitions and quests for social prestige at the expense of lives of genuine collaboration? Let’s try a little tenderness before we cook the Earth’s biosphere to a crisp, shall we?

Without human decency and mutual support, and empathy for each other and a sense of connection with all consciousness, how can we ever transcend the “I’ve got mine” mentality to save what we love, even love itself?

And right this moment: Listen. You don’t threaten, as Hillary did, to “ramp up” military strikes against a place, a community (even as The Donald seized the moment to emit yet another rant against human migration), because someone’s home-grown soul in Orlando, Florida was so unhinged as to turn a safe space for queer people into their death trap.

Listen. You don’t get to use an attack on queer people to threaten violence on some other community. You don’t exploit the hurting of people who have taken down gender-based social walls in order to fortify your nation-based ones. Enough blood has flowed. 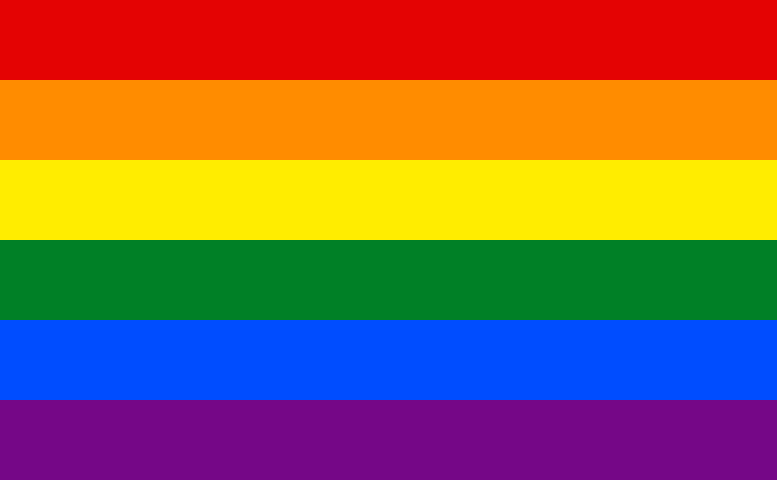 The green stripe in the rainbow flag means nature. The use of military weapons on so-called foreign nations destroys safe spaces for someone’s children, for other conscious beings, and for the biosphere that’s home to all.  Disrespect that biosphere, and you disrespect an integral element of the pride movement.

Red stands for life, orange for healing. Yellow stands for sunlight. Blue is for harmony. Purple, for spirit.

The banner of nation-based bullying can’t hold a candle to this.