I am vegan for the planet. For our biosphere, really: for the sake of all of Earth’s living communities. Veganism is an environmentally conscientious stance, understood in conjunction with the deep empathy and respect that’s the essence of the vegan principle.

Yes, of course, I am vegan for the cows, pigs, sheep, and all the footed, finned, and feathered ones I spare from Death Row; but then, the deep empathy in veganism means respect for their ancestral communities in nature. It means defending their right to live on nature’s terms, not the terms of animal breeders. That means sparing animals from being systematically turned into our pets, too.

Can we agree that deep empathy (which enables care) and respect (which is the basis of a liberation philosophy) are the essence of veganism? If so, do we say so?

Or is the deepest-rooted reason for veganism neglected in our advocacy?

Especially now, posits Bill Drelles, a vegan in Cleveland, it’s important to ask questions about veganism’s essential ethic. Bill points to the electoral triumph of Donald Trump as interwoven with a distrust of intellectual and factual argumentation, and wonders if there are any lessons here for vegan advocates whose outreach has become increasingly based on health and climate-related arguments.

To argue that vegan living makes you healthier or environmentally friendlier, Bill observes, you’ll have to rely on facts, projections and analyses. If published, such work is typically met with opposition through conflicting articles, books, and other media—coming from parties with the resources to overwhelm truths even by creating just an element of doubt (as climate change deniers do). 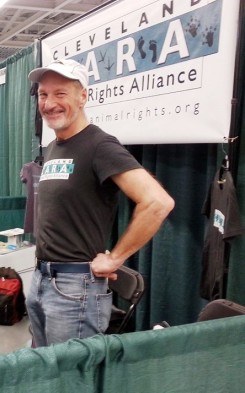 The ethic at veganism’s essence, though, doesn’t rely on facts, assumptions, and analysis. It comes from the heart—timeless, and articulated clearly and succinctly by Donald Watson and supporters.

Are today’s vegans familiar with the origins of veganism, and what its creation was based on?

Time is never wasted when spent delving into the vegan community’s originating principles. For regardless of the factual or logical relevance of the environmental, health, social-justice, and other motivations for being vegan, central to veganism is our forthright, conscientious objection to warring on other living communities—our respect for their lives lived, to the extent possible, on their terms.

Advocacy using compelling, science-based arguments does play an important role. That’s because if the vegan movement’s essential principle is its foundation, then such arguments are part of the superstructure.

But the main thing, Bill says, is this. Deep empathy and respect for the Earth’s living communities must be known as the foundation upon which our environmental and health-related arguments stand.

Eventually I’d like to be able to pay to have the advertising removed from this blog. Please bear with me and know that this blog is unrelated to any of the advertisers that WordPress lets post here.

7 thoughts on “A Reason to Be Vegan”

Leave a Reply to Emy Will Cancel reply