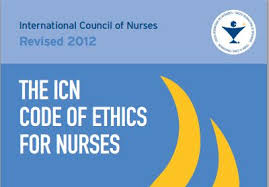 Recently my friend Brenda Trerice, a retired RN, directed my attention to their Code of Ethics—a guide for action based on social values and needs.The Code has served as the standard for nurses worldwide since its first adoption in 1953.

The nurse practices to sustain and protect the natural environment and is aware of its consequences on health.

Brenda senses a connection between this ethical tenet and animal-liberation philosophy; but explains:

Yet articulating it requires such subtlety so that one discovers then starts to make more connections on their own via their own psyche (memories, experiences, observations, resolution of dilemmas) so the choice is made in full consciousness for all time. Of all the health professionals, I think it is nurses who could grasp this philosophy easier than most others.

Why nurses? Because the nursing orientation is holistic. The individual is perceived as an integrated whole having biological, psychological, social, and, depending on the individual, spiritual aspects—not simply a disease or body part.  It is a mere leap across a gap, the connecting of a nerve synapse, to understand whole and health in the larger sense: the Earth and all inhabitants. Veganism is holistic.

Earth’s atmosphere sustains all living beings within it. No animal is meant to live forever, nor to escape pain. Yet all require nurturing, nourishment, and balance. All of our lives are placed in danger by the degradation of Earth’s surface features, by mass extinction events, by climate disruption. Each factor alone will unravel life; it’s a matter of time.

So to step back and regard the big picture means to understand human health as existing within the sanity of nature.

Breeding animals and keeping them in confinement (shooing away predators and taking up land for feed crops as we do it) constitutes a practice in opposition to the natural world.

And the placements of animal confinement, and slaughter sites as workplaces, affects vulnerable human populations.

At Vegstock in September, I noted a Johns Hopkins public health study cited by Dr. Ana Negrón indicating that half of the population of slaughter workers test positive for campylobacter. And then there’s the rate of amputations in the industry. While nonhuman lives are commodified completely in animal agribusiness, the arena is and will always be inhumane to humans who must work in it.

Everything depends on climate. Plants are losing the conditions that support them. By 2100, some tropical regions are predicted to have 200 fewer growing days a year. The health and nutrition impacts remain to be seen, but how could they not be harrowing?

And consider what’s happening to untamed animal communities as climate zones shift and native plants stop growing in their habitats.

Climate change is complex; but the major role played by animal agribusiness is now well known, and it is connected to massive fossil fuel use. We keep releasing stored carbon dioxide (through transport and electric refrigeration) and disrupting Earth’s capacity to

store it (by cutting down trees to enable both grazing and growing feed crops). We’re releasing methane into the atmosphere (in significant part, though our domesticated animals, mostly cows).

Animal manure is a major source of the greenhouse gas nitrous oxide too.

I’m making the connection with animal agribusiness, the health risks plaguing people in animal husbandry and slaughter, and the health of our biosphere. I haven’t made any eating-related health claims; I’ll leave that to the people in the medical field.

There is still much more to explore: the ethic that addresses our duty of care for the animals we domesticated, and to the untamed Earth that’s habitat for animals who could still live free; and how we would nurture a developing humanity that sustains and protects the natural environment and the conscious lives moving within it.

But to start: Should the International Council of Nurses take a broad view of health—situating it in its actual context, which is the planet’s whole biological community?

Here (PDF) is the International Council of Nurses 2014-2018 Strategic Plan. Those who implement such plans are not guided here, at least not in any concrete ways, to come to grips with the Council’s longtime ethical commitment to sustain and protect the natural environment and promote awareness of its consequences on health. Can the Council, in a time of environmental crises, neglect these issues?