Last night I watched “Fire,” the first episode of Michael Pollan’s Netflix mini-series Cooked based on his book by the same name. The show weaves together Pollan’s life as an author/personality in California with the story of a group of Aboriginal people in Australia portrayed as hunter-gatherers as well as a “pit master” from the American South. The central theme explores fire as an evolutionary and cultural symbol that allegedly predisposes us to eating animals. And the sweep from one cultural extreme to another is supposed to make some profound statement about the cultural universality of hunting, raising, killing, preparing and eating animals as a kind of rite of evolutionary passage and a remedy for our modern day aversion to cooking. In his search to find the primordial roots of eating flesh, Pollan’s new-age journey finds himself sitting around a fire pit, upon which a whole, gutted pig is searing, and drinking beer with his 50-something friends in a kind of male-bonding ritual. Here Pollan seems to go out of his way to impress upon us that he is as real and down-to-earth about food as he is worldly and philosophical.

“Fire” is stoked with all of the rhetoric and progressive foodie tropes that Pollan made infamous in The Omnivore’s Dilemma, including “thanking the animals for their sacrifice,” “knowing where your food comes from makes you an ethical eater,” “raise and kill them with kindness,” and, above all, honoring “the natural order” in which farmed animals are essential, not only as a human food source, but also as a source of fertilizer and ecosystem “balance.”

“Fire” cleverly interjects two subtle yet powerful anti-vegetarian messages to further bolster its case for eating animals. The first is the story of the former “animal rescuer” turned pig farmer who claims to have found a higher calling by raising pigs to feed her community. She would rather see her local town’s people eat pigs that were responsibly raised on her farm rather than from a factory farm. It’s a common logic that sounds plausible on the surface to many of us, until we recognize the false dilemma implicit in the statement, the false either-or scenario that excludes the very real possibility of feeding them with plant foods instead. She names her pigs and tells us that her impregnated mother sow reminds her affectionately of her grandmother. All the while she is fattening up and preparing her offspring for slaughter. In her final scene, she is bidding her pigs farewell as they are loaded on to the truck bound for their deaths, padding the truck with blankets to ensure that at least their transport to the slaughterhouse is cozy. Stories like this one seek to reassure us that farmers are good people who care, even if they do ultimately betray the juvenile animals who learned to trust them. And more importantly, they seek to obscure the fundamental distinction between farms and sanctuaries. They obscure the fact that farms admittedly value animals to the extent that they provide an economic resource and dispose of them when they outlive their usefulness. On the other hand, sanctuaries see each animal as an individual having intrinsic rather than economic value, worthy of living out their lives as comfortably as possible, much like the animals in our lives we regard as “pets.”

In another scene, Pollan insists that a young vegetarian guest at his dinner party sample the pig. Predictably, she is overcome with ecstasy upon tasting it, and Pollan and his male friends gloat in their “gotcha,” ego-stroking moment. But this decisive moment renders all of Pollan’s elaborate ethical posturing leading up to this point essentially meaningless; it is ultimately taste, and not ethics, that renders even vegetarians complicit to eating animals. This act of vegetarian surrender fulfills the meat-eater’s fantasy in which they imagine vegetarians sabotaged by their “natural” desire to eat flesh and the meat-eater’s triumph over the vegetarian’s betrayal of her values in the name of her taste buds. It says as much about the objectification of animals as it does about the male desire to control women. 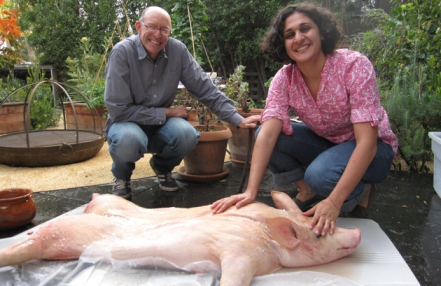 But perhaps the most strikingly dishonest narrative ploy in “Fire” is the attempt to blur the important moral distinction between hunting and eating animals for reasons of survival as portrayed by the Aboriginal hunter-gatherers with Pollan’s celebratory pig roast in which eating animals, far from being necessary, becomes a glorified centerpiece intended to woo guests. Indeed, the eating of animals is fetishized here as straight up palate porn. Pollan indulges his animal-eating viewers by unapologetically wallowing in the pleasure he derives from the pig’s flesh, but also the satisfaction he gets from connecting to his “food roots,” his hunter-gatherer ancestry.

Throughout “Fire,” Pollan makes sweeping nutritional and environmental claims without citing any credible evidence, as if to suggest that his notoriety as a food writer somehow makes him a authority on nutrition, environmental science and animal behavior. One of the many highly debatable claims he makes is that farmed animals are beneficial and even necessary for healthy ecosystems. “There is something quite elegant ecologically about having plants and animals together,” he tells us. But, as environmental author and activist Will Anderson writes, “…we can accomplish magnitudes of recovery more if conservation biologists introduce native species in tandem with the end of animal agriculture. As it dies, ecosystems will thrive. Conservation biologists will need generations before plant and animal communities regain at least some relationships that are essential to the ecosystems. Grazing cattle will be replaced by the original inhabitants, the bison, antelope, deer, tallgrass and shortgrass, prairie chickens, and ground squirrels. Highlands and lowlands, forests and plains, all should be rid of the pox that livestock represent. Livestock were never needed as replacements to benefit ecosystems.”

In the end, Pollan’s dilemma is not really a dilemma at all. He advocates, without remorse, the eating of animals raised in preciously rare circumstances and available only to an affluent niche, readily admitting that he can’t justify most of the animal products he ends up consuming due to the difficulty of tracing them. His vague conclusion is that we at least express intent to do better, without any serious attempt to act on that intent or hold ourselves accountable in any meaningful way. In the end, Pollan’s “Fire” amounts to a half-baked, half-hearted recipe for a more evolved, ethical way of eating, but his lack of moral courage ultimately extinguishes the flames of that fire.

Robert Grillo is the director of Free from Harm which he founded in 2009. As an activist, author and speaker, Grillo focuses awareness on the animal’s experience and point of view, drawing on insights from sociology, psychology, popular culture, ethics and social justice to bridge the gap between humans and other animals.  As a marketing communications professional for over 20 years, Grillo has worked on large food industry accounts where he gained a behind the scenes perspective on food industry branding. He is currently working on a new book about how popular culture uses a variety of fictions that appeal to our beliefs about farmed animals and animal products, heavily influencing our food choices. The book is based on his keynote presentation, Fictions, Facts and Food Choices.